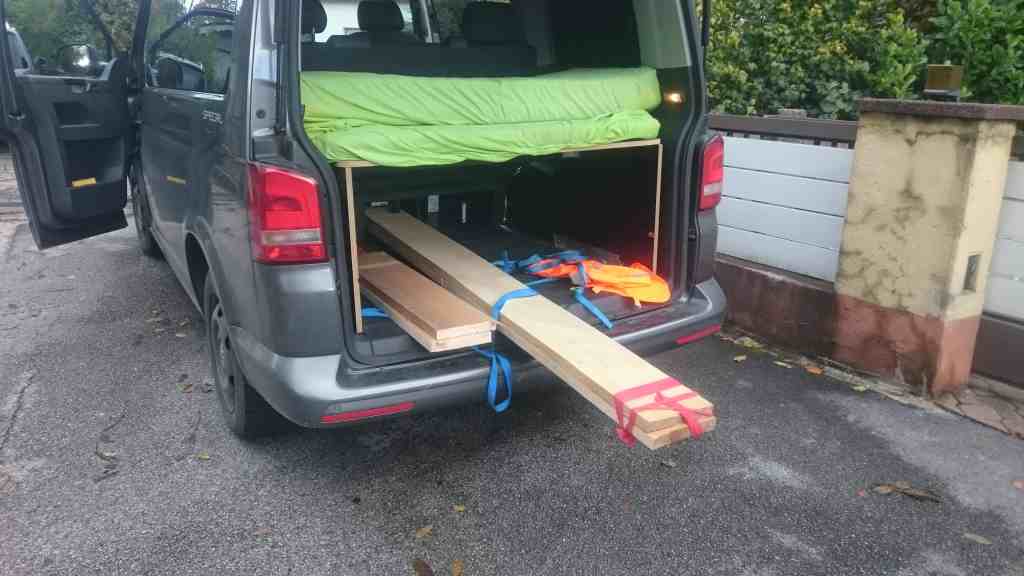 Hi, my name is Markus, I am located near Salzburg in Austria.

I started my build already at the end of october but received my login with a little bit of delay.

I used one board of white oak and one giant board of fir that I found at a small local sawmill. In order to get it in to my van I had to split it longitudianal and cut the ends off.

Since I dont have a thikness planer I used my small tablesaw to cut my boards to the apropriete dimensions. I put the saw in the doorway of two rooms in the basement in order to have enough space for the feedout table. Instead of a router I used a drill press for the mortises.

Building the curved deckbeams using all my smaller clamps.

After finishing the deck I realized, that my gunwals are not absolutely symetrical although I cut the gunwals out of one board (but I think, I should not have flipped them two times?)! I try to not freak out and hope that this will level out to some extend in the ongoing process when putting the ribs and stringers on!

This weekend I managed to put the ribs in. This took me one full day, since I was not so well prepared. At first I had to rebuild my steambox two times because of choosing wrong materials (do not use EPS insulation foam!) and than I had a lot of cracking ribs. I used air dried oak but not all ribs had a straight grain. Due to the delay in the process I was not able to put the keelson and the stringers on before the night. Instead I klamped a slat down and the stringers on to keep the shape of the ribs over the night.

After putting the keelson on I realised that the asymmetry of the beginning did not level out but pulled the deck into a paralellogram shape. I decided to cut the pegs in the bow and stern in order to slide the gunwals 3mm against each other until I was happy again with the shape. Than I drilled out the old pegs and replaced them with oversized new ones and glued them in. This worked out good and the deck looks now mostly symmetrical!

Lashing on the bow and the stern. Before I finaly attached the stringers to the ribs I cut of the keelson again and replaced rib number 4, which turned out to be a little bit too short.

This weekend I shaped the bow and the stern. A quick symmetry check showed that the center of the frontdeckstringer is about 4mm off to one side. Hope this will not affect the properties of the kayak in the water . After that I put the deckstringers and the secondary stringers on.

Instead of using ash for the aftdeck stringers I desided to use my ordinary fir wood and double it up by glueing some ribstock to the underside of the beams. This should make them strong enough to support my weight.

After putting the stringers on I realised that my boat still was not symmetrical and the bow was poiting to the left. I was thinking about making new gunwals but then I decided to give it another try to pull the gunwals straight. This time I also cut the pegs conecting the deckbeams and moved the starboard gunwal about 5mm forward to bring the bow to the right. This led to a slight shift of the deckbeams but improved the symmetry of the gunwals.

View posts by Markus
Hi, My name is Markus, I am living near Salzburg in Austria. I love paragliding and kiteboarding and I stumbled over the Cape Falcon Kayak F1 during my research for building hydrofoil kiteboards. Even though I've never ridden a kayak, I absolutely had to build an F1! I'm curious where this will lead ...

This site uses Akismet to reduce spam. Learn how your comment data is processed.

Blog your build is a new way to share your build, get connected with other Cape Falcon Kayak owners and builders, and save some money at the same time.

Bloggers still purchase the online building course, but receive their plans for free. In exchange, every time they build, they post some photos and comments about their progress, along with an initial paddling impression and another one 6 months later.

For the 3rd post in my short series talking about

I was going to resume talking about the kayak buil

First day of kayak building on the floor was chall

We spent the morning shooting video updates to the

Just posted a video to the Cape Falcon Kayak YouTu

The challenging part of my work here is finding ti

More work on the F1 kayak. This is the end of Day